Sandra Fettingis has an interesting body of work centered around a combination of film, acrylic, sculpture. “I print archival, digital images on clear film and mount them on acrylic sheets. I then layer the acrylic/images to create three dimensional wall sculptures. The end result can best be summed up as multi-layered 2-d prints that combine to form a 3-d object.” A few of my other favorites below ~

I am not a geek… well not totally… ok well, maybe sometimes? Denial aside, i don’t usually post this kind of thing, but the ladies over at GeekSugar were far too sweet and asked some fun questions… SO. Here is their “*Geeky Girl We Love: Jean Aw of Notcot” interview with me ~ and some gadgets i can’t do without! Big thanks to GeekSugar ~ honored to make their list of geek girls!

I found the Le Labo “Olfactionary” on the Barneys site and immediately thought of Perfume: The Story of a Murderer by Patrick Suskind, the book responsible for making me wonder about and appreciate the perfume-making process. The Olfactionary is a collection of forty 2.5 mL bottles, each filled with natural essences which are the principal scents in perfumes. They also include olfactory keys (blotters) for sampling the scents.

I love the the minimal look of Le Labo’s packaging, especially the lab-like labels which are pretty appropriate because really… it’s just chemicals. Each perfume is made to order, and the label is customized for you. 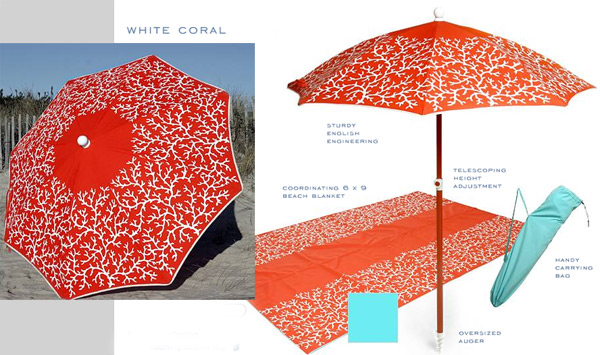 Anyone who knows me, knows my biggest weakness (yes, over design even) ~ is the beach… something about vast openness of sand and ocean just chills me out like no other… and today is definitely a beachy day in SF! So couldn’t resist posting these gorgeous umbrella, beach towel sets from Le Dauphin that i got im-ed. This vibrant red of the white coral pattern is beautiful, and just what we need more of, instead of those 10$ drugstore beach umbrellas that are so easy to end up with.

Remember when beck’s latest album had the DIY sticker album art? Well he had some great stickers from my favorite artist, Genevieve Gaukler, and now from the folks at Jeremeyville have a limited edition Sketchel, featuring art from Beck and Gaukler. “After many emails and calls between Sydney, Paris and LA, Beck, Genevieve and the Sketchel crew arrived at this limited edition shoulder bag which is available at the online store. Genevieve created a design specifically for this project, incorporating her iconic black figures into a Beck landscape on a heavy canvas that is housed within the bag front flap.”

Waste ~ Barcelona based company recycles automotive interiors for handmade bean bags of sorts…. designs reminiscent of Fatboy and Sumo Lounge. “Waste recycles discarded automotive upholstery to produce unique and limited-edition products. Ideally, no waste would be produced, but as it is, we are committed to transforming the reality of waste into something positive.” via TreeHugger.

On more rabbids to love, just found a link to these, 20th Anniversary Rabbids, but there were only 150 sets made, and it doesn’t seem to want to let me add them to the cart. See my other Rabbids here.

What imagery is more perfect for an aircare product than a giant pill? Afterall, if the need for an air freshener isn’t a giant pill/cure all… what is? Couldn’t resist the draw of method home’s gorgeous packaging and design today ~ so below are some shots of the details that made all the difference to me: 1) there is a scratch and sniff sticker as the seal of the box. 2) you can turn the plug depending how your plugs are oriented to keep the pill upright 3) playful use of language “Do not turn sideways, or else fragrance oil will spill. Gravity is mean like that.” So true.

Also, i’m in love with the OMop ~ cleaning floors has never been more fun to me… again with the great packaging and incredibly well designed (for form and function) product.

So apparently my laziness on the org/tastespotting roundups lately has bothered some enough to request them back… so not only will i try to start doing them every tuesday… i even gave it an image map, so you can click directly on the pictures to go to the actual notcot.org and tastespotting posts (you can tell which one it was on the page, from the specially colored post numbers ~ well, that and recognizing which pic you just came from!)… Top row are some fun things from org, bottom row are tastespotting yummies. There has been so much great stuff on both lately, its been hard to keep up!

Adopt A Squid ~ and parts of the profits are donated to the Red Cross to help Tsunami Victims. Incredible enormous handmade stuffed animal squids… playful graphic design on the site. (see more images below.) 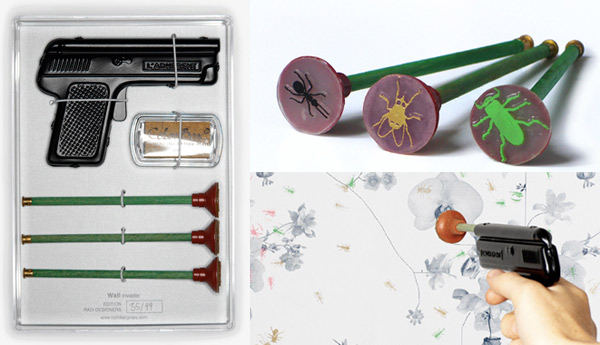 It’s not what you have, its how you use it. This Wall Invaders set by french design team Radi Designers, is perfect example of how else you can use a a dart gun, rubber stamps, and an ink pad… well, combined with a wall. Not much to say here really, but visually and conceptually this one made me giggle a little… also reminded me of the opening scene from A Scanner Darkly… imagine if he had been shooting the bugs he *saw* with this gun… 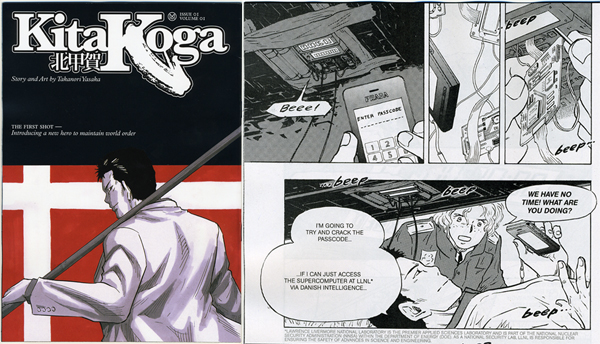 So, i’ve procrastinated on flipping through Tyler Brule’s latest endeavor - Monocle “a briefing on global affairs, business, culture, & design” ~ and i think it might me one of my new favorite reads… but the real question is how did no one tell me about Kitakoga? The pull out manga in the back of the issue ~ think— the comic book for the Bruce Wayne set? I’m hooked. And the blatant product placement made me giggle the whole time (who wants a prada phone now?)…

Here’s the premise (go on, read it out loud to yourself in that dramatic voice-over tone): “Spring — 2010. A Democrat is running the White House, Sweden is about to take up the reigns of the EU Presidency, NATO is still heavily engaged in Afghanistan and The Horn of Africa is up for grabs. On the opposite side of the rapidly melting polar ice cap, Canada has become the self-appointed guardian of the top of the world and Russia’s playing catch-up. China is still basking in post-Olympic glory and South Korea has become the region’s new creative powerhouse. In the middle of all of this, Japan has assumed a more assertive role not only within Asia but also globally. The country stunned the world in 2009 with the surprise launch of a corps of robotic soldiers it deployed to protect its embassy in Beirut and has been working on the launch of a new unmanned air vehicle that has sparked the curiosity of governments around the world. A special branch of the defence ministry has been established to safeguard the technology. Shinobi (shadow ninjas) are the guardians of the Rai-zing (Thunder of God) project.”
The animated feature should be done by the Batman: animated series folks in collaboration with the Evangelion team? [Lots more below] 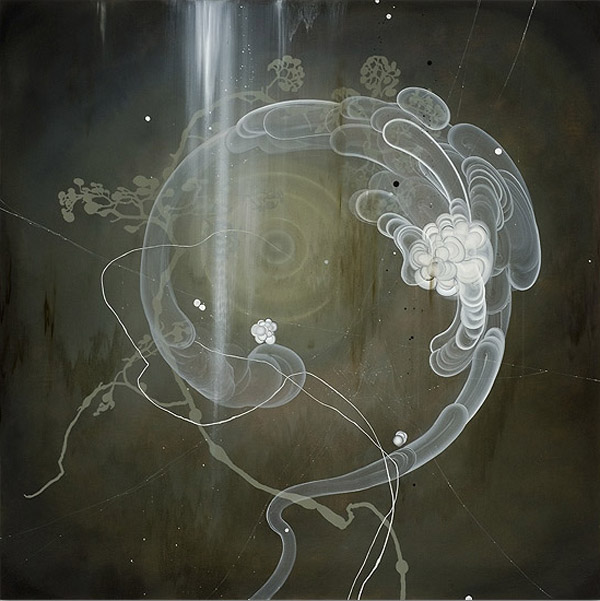 The work of Darren Waterson is the most inspiring thing i’ve rediscovered today, first introduced to me as a certain someone had me trying to hunt down the artist of the Silversun Pickup’s latest album cover (and believe it or not, googling was unsuccessful, but wiki-ing and emailing their PR worked nicely). And i know i don’t usually post are quite this largely, but this particular piece mesmerizes me to no end (and a few other of his recent pieces i love are featured below as well). This is “His Universe”, 2005, 60’x60’ ~ can you believe that is oil on wood? organic, fluid, abstract, detailed, flowing, deep, i dont know how to describe his work really… somewhere between what a friend mentioned as reminiscent of old scifi covers… and also brings to mind the work of inka essenhigh… either way, there is something inspiring and meditative to these pieces. And he’s a local! BA from Otis ~ studied at Kunst ~ and resides in SF currently!

Antenna ~ go write it down. This is a magazine to look out for this summer! Preview issue just showed up and i’m smitten. As much as blogs amuse me, they will never replace my need for magazines… something about precise layouts, the touch and smell of paper, the way you can FLIP through a stack of pages… its not to be replaced! That being said, Antenna got my magazine excitement going again, especially since it has some fun graphic design, and reads like a mix between Lucky magazine and design magazines with a dash of the street/skate scene. (oh and its more guy slanted, but without the softcore)… this issue literally goes from A to Z as you can see in the contents page, and between the “real” articles… i’m loving their layouts for themed pages… like roundups of great glasses, cell phones, candy, condoms, bomber jackets, skateboards, and so much more… so here’s a sneak peak of some of my favorite pages to keep you going until August 2007! [and the (N)EEDS- morning after section cracked me up.] 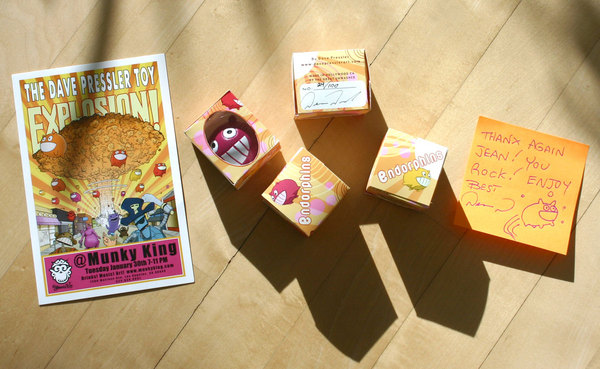 Endorphins are the feel good hormones… you know you love em… they give you that happy high. And who would have thought that you could sculpt them out of resin for a similar effect? Well the pictures made me smile enough… but i just received the sweetest package from Dave Pressler today with a set of 4 Endorphins from his latest show at Munky King ~ and as much as i love collectible toys, i HAD to open one… its living just below my monitor next to my mimobot… and in reality ~ that grin is even more contagious than you can imagine, when you can actually hold them in your hands. Big thanks to Dave, these endorphins gave me just the energy boost i needed today!