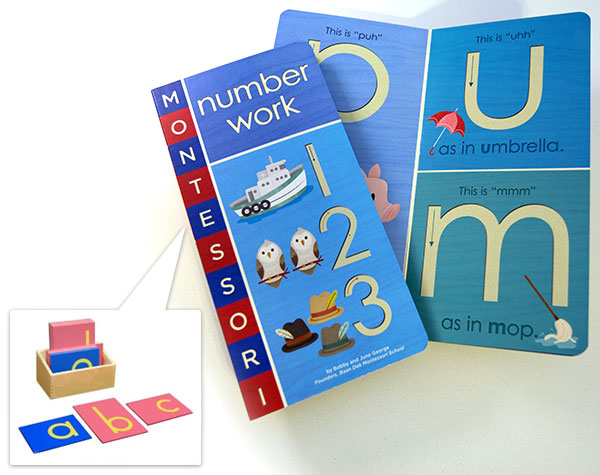 It’s no secret that Justine and I both grew up Montessori kids and it’s stuck with us. In fact, i’m sure the design aesthetic apparent in so many of the gorgeous, glossy woody learning tools was an early influence on us. I’ll never forget learning my letters and numbers on the sand paper tiles where you run your finger along the sand paper to learn the shapes and how to write them…

Well, Bobby and June George, founders of the Baan Dek Montessori School in Sioux Falls, SD have been actively taking Maria Montessori’s philosophies and principles into the next generation with their beautiful, intuitive Montessorium iPad apps! With Intro to Math, Intro to Letters, Intro to Geography, and Alpha Writer they have been off to an amazing start… and have just released two board books: Letter Work and Number Work. While mainstream tablets haven’t evolved to let you feel textures quite yet… these board books bring back the sand paper letters of my childhood into a new format. On the cover as well as inside the books you can trace the sand paper textured letters and numbers! You learn the sounds and shapes before learning what they are called… and beautiful illustrations by Alyssa Nassner accompany them. Beyond the nostalgia ~ these are definitely going on my go to list of presents for little ones! Take a peek inside the books on the next page! 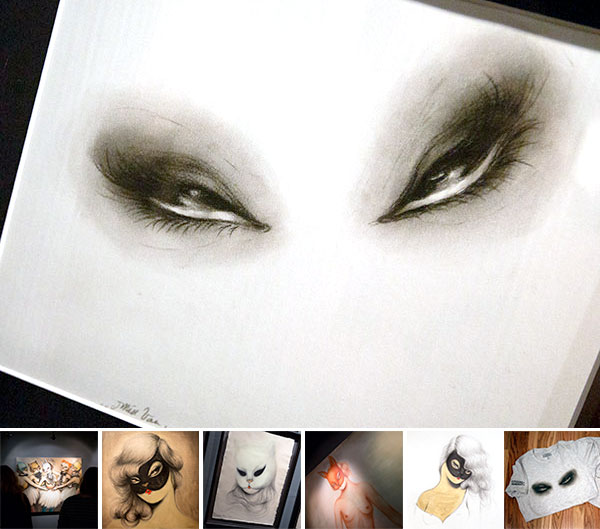 It’s been a few years since i’ve been to a Miss Van show ~ you can see pictures from some of her 2006-2007 shows in the NOTCOT archives… tonight, i popped by Miss Van’s solo show“Wild At Heart” at Copro Gallery. A playful series of work filled with masks and her signature ladies with a focus on the eyes… The press release says Choosing to focus on details while isolating different body parts, such as eyes and mouth, Miss Van adds, “The masks allow me to show more feelings, other sides of a same character, hiding the face, partly or totally and embracing the animal strength, personality and attitude. I am illustrating the chemistry between the feminine delicacy and the bestial instinct, natural and raw and we all have this duality inside.” This show is sponsored by fashion brand, Citizens of Humanity, which is branching into the arts. Show visitors received Citizens of Humanity t-shirt collaboration with Miss Van (only in girls sizes!) with a print of one of the eyes from the show on them, and she will also be featured in the premiere issue of a new collectible print publication by Citizens of Humanity launching this August.

Take a peek at the show and the t-shirt on the next page! 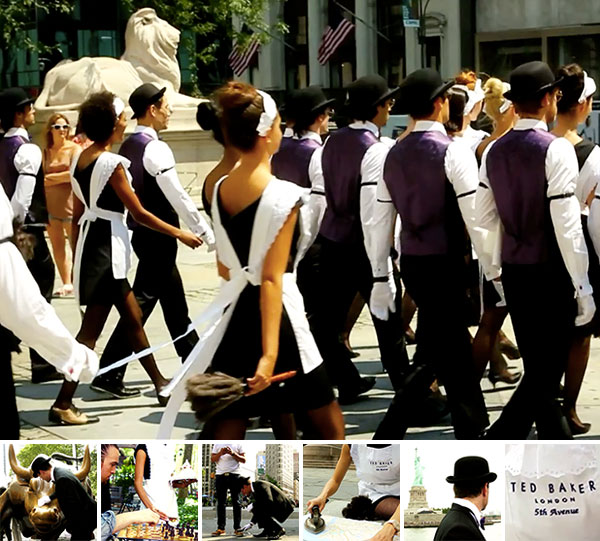 To celebrate and announce the opening of Ted Baker London’s ‘Grand House’ store on Fifth Avenue in Manhattan, they sent a swarm of 20’s era Maids & Butlers around to clean up the city! In the video of the adventure, you see them polishing subway poles, ironing maps, cleaning the bull on wall street, pouring tea for chess players, befriending horses, singing with the naked cowboy, poop scooping and much more! See the video of all the fun on the next page! 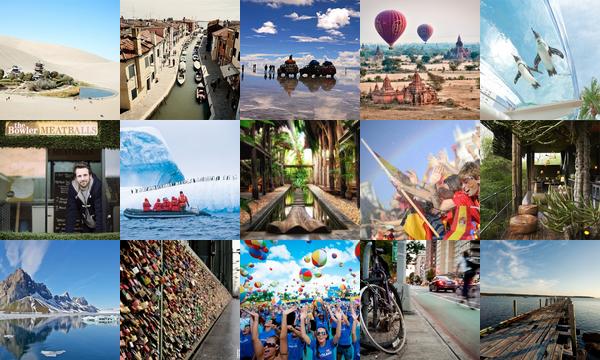 Exploring the Gobi Desert, the wilderness of Antarctica and private safari lodges are all part of this week’s roundup from NotVentures. To find out more about each post, click on its individual image. 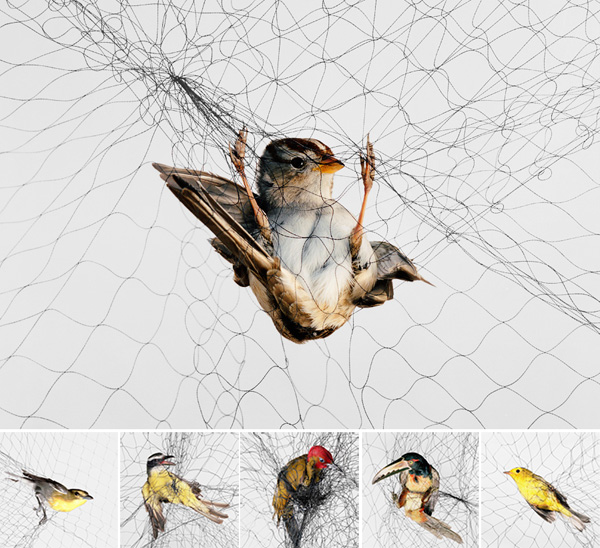 It’s an unusual sight for most of us, beautiful birds captured on camera, not in the freedom of flight, but tangled in the confines of mist nets. Photographer Todd Forsgren captures birds in unusual poses. Inspired by the work of Audubon, bird-watcher Forsgren’s photos shows fascinating bird species captured in mist nets, the thin barely visible nets that act like huge spiderwebs used by researchers to collect data on birds.

Unlike Audubon’s original subjects which were shot, stuffed/mounted, then painted, Forsgren’s subjects are only briefly captured by researchers before being released (after being weighed, measured and given leg rings). The photographs are poignant and beautiful glimpses at some rarely seen species in often awkward poses, which Forsgren describes as the “fragile and embarrassing moment before they disappear back into the woods, and into data”. Beautiful! See more selections from the series on the next page! 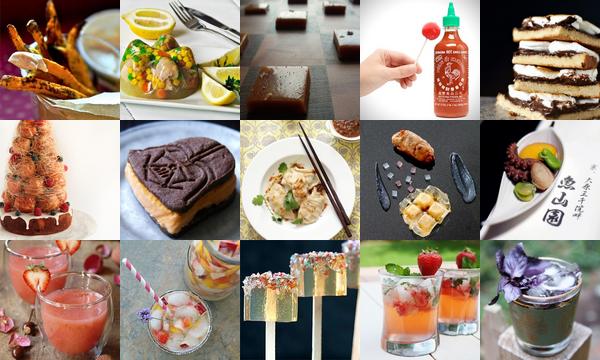 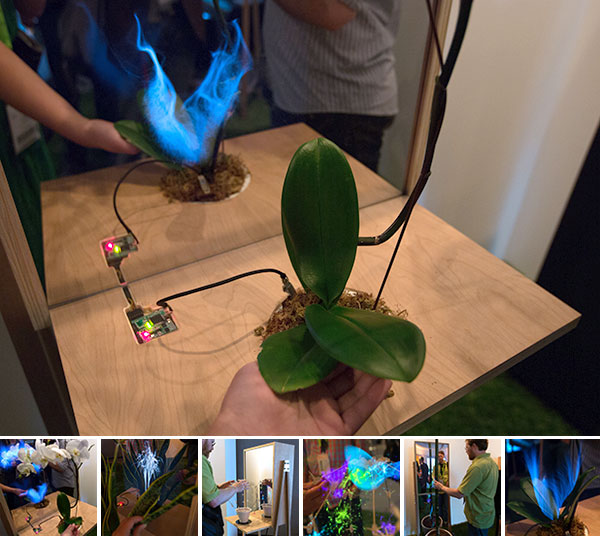 Just back, and the project definitely worth seeing in person at Siggraph 2012 comes from Disney Research - Botanicus Interacticus turns plants into human-computer interfaces… caress, grab, approach the plant to change the visualizations! Plants as interfaces seems to be a growing trend. This reminded me of Mathieu Lehanneur’s 2010 Once Upon A Dream bed that we saw in Milan, where you barely touch the plant hanging overhead to activate the light dimmer. Also, NOTCOT.org just highlighted Viktor Kölbig’s Aura, which turns a plant in a glass of water into a light, and you touch the plant to change colors. However, Botanicus Interacticus, using Disney Research’s Touché technology takes those concepts even further, being able to sense various gestures, such as sliding of fingers on the stem, touching, grabbing, and even proximity to the plant as well as the amount of touch and more! In fact, they created an amazing tactile feedback (accidentally!) with the orchid example, where when you touched it - you’d feel tingling vibrations! (Which they said was from speakers beneath.)

Botanicus Interacticus comes from Disney Research’s Ivan Poupyrev in collaboration with Philipp Schoessler, Jonas Loh/Studio NAND, and Munehiko Sato. Can you imagine the interactive possibilities? The spaces you could create? Be it an interactive theme park space you explore… or dimming the mood lighting in your living room… controlling your music… sounding an alarm? Things you could hide in your garden? A replacement for botanical garden information cards next to plants? The options are endless, and a great example of ubiquitous computing becoming reality! However, i can’t help but wonder, how this will evolve to accommodate how careful you need to be when watering the plants, or they start to grow?

Take a look on the next page to see their display at Siggraph, the 4 examples they set up, video, and more information on Botanicus Interacticus!

TO PAGE 2 of "Botanicus Interacticus by Disney Research"! -----> 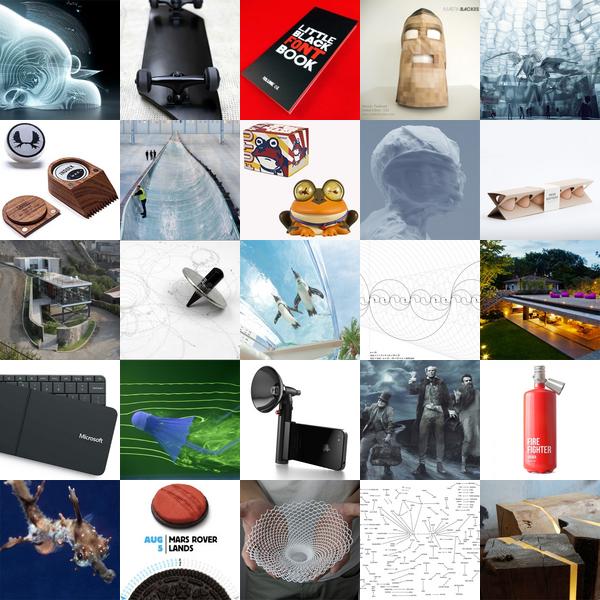 Flying penguins, media camouflage and the dynamics of sport all feature in this week’s roundup from NOTCOT.org. To find out more about each post, click on its individual image. 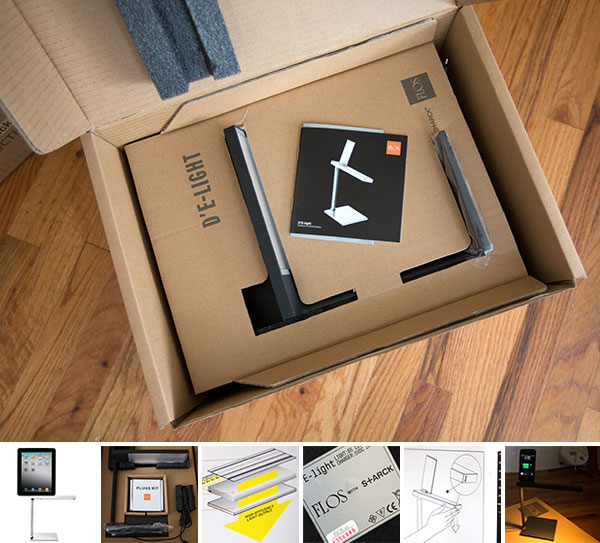 NOTCOT SPECIAL from FLOS! Enter NOTCOT at checkout to receive 10% off of the D’E-Light Table Lamp by FLOS exclusively at Lumens.com. Limited to the first 10 NOTCOT readers.

Perhaps the ultimate iPhone/iPad charger accessory for your desk or bedside table… the Flos D’E-Light by Philippe Starck! In addition to its chrome finish, this minimalist, energy efficient LED desk light is now in an awesome matte black version exclusive to Lumens! Flos and Lumens were kind enough to send one over for us to check out, and it looks and feels even better in person! (Though somehow in my head, i imagined it larger than it is!) The matte finish feels like a soft touch rubber, and the simple touch sensor on the side of the light glows a subtle orange… there are three states it toggles through, 100% brightness, 50% brightness, and off. Within the box are even plug adapters for multiple countries (including US, Europe, UK). Take a peek on the next page at the full unboxing as well as a look at all of the details! 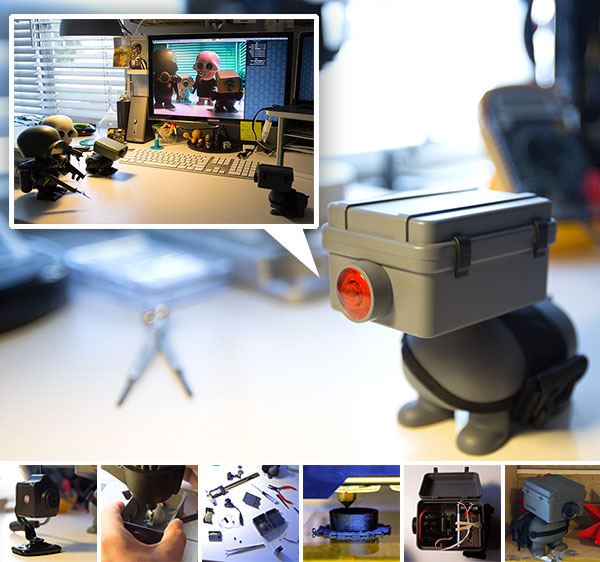 We’ve been long time fans of Project Squadt by Ferg and Playge. You’ve seen our NKD Jack as well as our little team of Fr0g and K11 Sp0ts (s001 + s003). From their intricate details, accessories, branding, and more ~ what’s not to love? In fact, in this year’s Designer Toy Awards, Ferg is up for Artist of the Year, Nozzel S00 Squadt by Ferg & Playge is up for Fan Favorite, Squadt Fr0g S001 & K11 Spot [SWAMP DWLLR] by Ferg & Playge are up for Toy of the Year, and Playge Doctor Skelve (W/ hood) by Ferg & Brandt Peters is up for Best Collaboration. Phew it’s been quite a year for Ferg and his ever growing collection of creatures!

With a K11 Spot (dog like creature that resembles a surveillance camera), we couldn’t help but wonder whether it could be an ACTUAL working camera! Together with Ferg, we decided to try it out! He sent over a Squadt K11 BOOMER (in addition to looking camera like, the little guy’s head opens!) and we went to work in the NOTlabs hacking a little wireless video camera into his head! It ended up needing some dremeling, 3d printing, laser cutting, and more to get the little guy going, but now he may LOOK like another toy on the desk, but he’s streaming video! See the process and video of him in action on the next page! 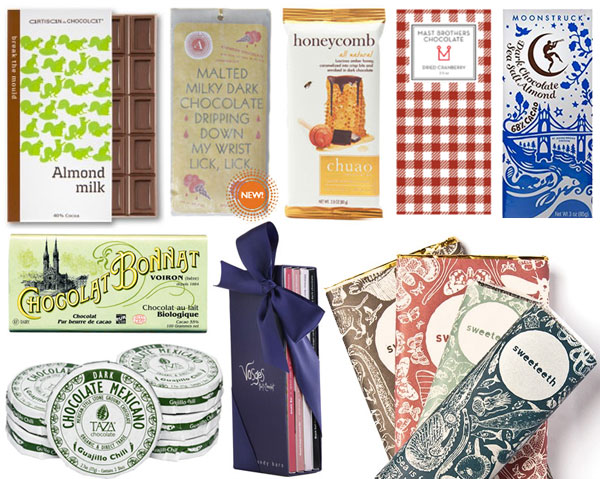 Today’s obsessive research has been on chocolate ~ chocolate BARS to be precise… and the beautiful packaging delicious artisanal goodness comes in. Ready to see what i’ve found? To the next page! Know of any i’ve missed and should try? Leave a comment!

A roundup of fasion’s finest from NotCouture. To find out more about each post, click on its individual image. 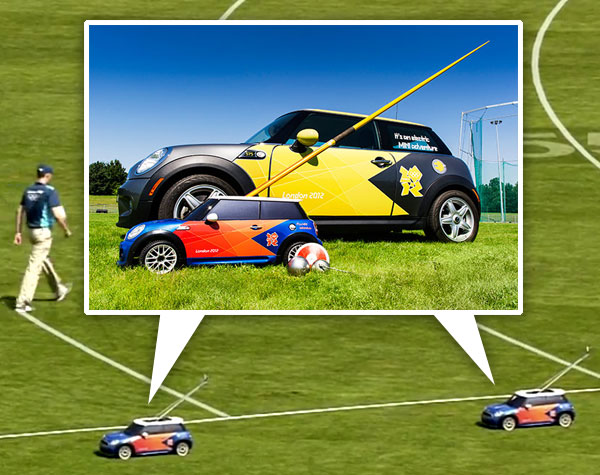 The Where’s Waldo of the 2012 Olympics is definitely spotting the mini radio controlled MINIs! Justine and i just spent far too long scrubbing through hours of Track & Field feeds and watching the latest coverage trying to spot the tiny minis in action… We shared these on NOTCOT.org, but have since learned more, and been obsessed with finding them in action!

What are the Mini MINIs? According to the BMW Press Release, BMW is proud to introduce another critical electric vehicle to the Olympic and Paralympic fleet: the Mini MINI. This specially developed and designed radio controlled electric car will be used on the field of play in the Olympic Stadium to ferry javelins, discuses, hammers and shots back from the field to the throwing area, saving valuable time during competition.

Three Mini MINIs will be deployed for this crucial task and will be operated by Games Makers assigned and trained for this duty. The cars are roughly a quarter scale of the full-sized car and carry the athletic equipment situated inside, accessible through the adapted sunroof. The Mini MINIs are all blue and feature the same Games livery as the ‘full-size’ official fleet vehicles. Each of the three Mini MINIs will cover around 6,000 metres per day in four-hour shifts across nine days of Olympic and nine days of Paralympic competition.

They are surprisingly hard to spot ~ and now oddly satisfying when we do find them… have you seen them in motion? Actually transporting the javelins, etc? See more pics (and share yours with us!) on the next page! 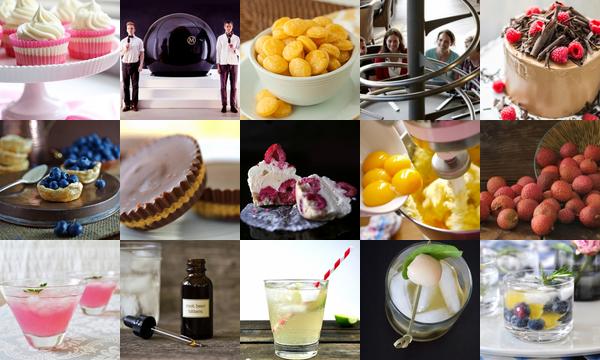 Ice cream cupcakes, homemade peanut butter cups and the blue spruce are all part of this week’s delectable roundup from Tasteologie and Liqurious. To find out more about each post, click on its individual image.

Home and cleaning through things after the last month of nearly non-stop travel, found this Cartoon Network 20th anniversary poster from SD Comiccon ~ can you believe its been 20 years?!?!?! And even crazier ~ can you find all the characters in the poster? Larger view of the poster and the check list on the next page!