It is not often you find a mug that will age with you and evolve itself into a handle that only your grip can make… nor have i seem many objects that evoke a clean japanese porcelain style while bringing out your inner Flinstone….. yabadabadoo? “This beer mug is instantly comical with the blunt placement of its stone handle. It references a time when man fashioned together natural materials to create useful tools. This object is substantial to hold and incredibly efficient as a mug. Note: Shape of stone may vary.” via MightyGoods.

BLaugh (i read it as “blah”) - is a brilliant concept i just needed to touch upon… check out their partnership with godaddy, sleek little copyright line built into the image - so if you snag it for your site it shows up, nice little discount action going on, clean site design. Also its about time people start poking fun of the blogosphere, its ego is getting to big, and for what reason? And those social networking sites as the next hot thing, just wait to be ridiculed. Anyhow i love the execution of their daily comics, touching on the big memes of the moment, with cheeky playful one frame comics (yes sometimes i really don’t like reading and do just look at all the pictures). So kudos to Fitzpatrick and Pirillo for a much needed daily amusement.

If you could be any animal, what would you be? Well right now i think i’d have to choose Roebling, the Bklyn Bunny… i mean, check it out - he has it made! A sweet clean classy website, some pretty comfy looking designer diggs, and that is some eyeliner that even the best of plastic surgeons couldn’t make happen… not to mention one of the cutest logos around. But the reality tv show feel of his life with constant webcam coverage i could do without. Go spy on watch him here. found this guy over at popgadget.

Tarsh Einfallsreich posted this great Australian Polaroid Rossa over to .org [which is under construction, the rss feed is down, and registration is in the works - we might need a few days to get this sorted, so post GENTLY] This is one sexy Polaroid that i am desperately wanting - and since the .org post look is very polaroidy - you won’t be surprised that their interface is something i can’t help but love! So check out Polaroid Rossa, you know you want it.

NOT BAD FOR A GIRL?

For every girl who took pride in being able to spiral a football, punch “like a boy”, or any other cliche moment where “You’re not bad for a girl” escaped someone’s lips - this one’s for you. Wear it with pride, and then feel free to punch out anyone who dares to comment that you really aren’t bad for a girl. So check out and support the line by Karen Jane over in the UK. NOT BAD FOR A GIRL. (incase you haven’t noticed i am loving their graphics today) via HighSnobiety.

If anything, we’ve learned in the last decade that absolutely ANYTHING can make a good bag… be it truck tarps and innertubes - old sails - parachutes - plastic shopping bags - old cans - seatbelt straps… and i thought i was starting to get over the trend…. then i get hit with FEUERWEAR! Yes - recycled firehoses (and seat belt straps) - german style. Nice design - and even as an anti-fannypack person - that hip pouch is pretty cute and could be cool for the right situations…. via Springwise 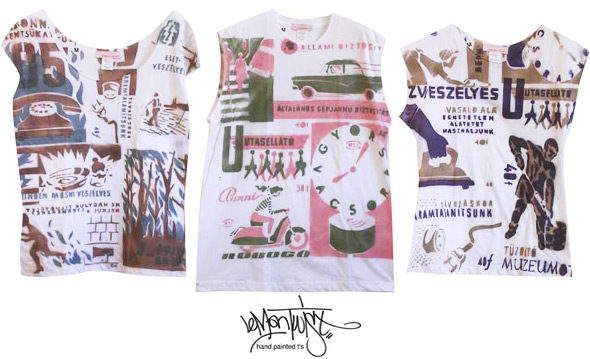 Who needs screenprinting? Not the folks at the San Francisco based label, Lemon Twist. They have these hand-(spray) painted tshirts that are sort of 80s, sort of DIY, and cooler than those airbrush tshirts from the 80s & 90s.

In light of certain events the last week (that caused everything to hit pause a bit) - i couldn’t resist posting this project that was up at Reluct. People do strange things when angry, vengeful, hurt, alienated. It’s a dangerous place to be in… especially when people take to physical manipulation as a form of emotional blackmail. NOT COOL! But if you’re going to have to do it - and pretend you had an affair, and WANT to get caught… which is the key here… Bjorn Franke developed the ” Traces of an Imaginary Affair project investigates this feeling through a kit containing a set of nine devices which leave traces of such an imaginary affair. The tools leave marks on the body such as bite marks, carpet burns, bondage marks, love bites, scratches and bruises. Probes of perfume, lipstick and hair can be applied to either the body or clothes.” - do it in style? or like a true psychotic designer/fancy tools in a pretty case aficionado? “The project examines the world of private psychological warfare within relationships, in which obsessive behaviour and disorders surface. Rather than offering the common approach of subjecting these to restrictive cultural norms, the kit enables people to exhibit them in a most effective way.”

But i can’t help but ask, if you’re going to go through this much trouble and hurt yourself a bit… might as well go ahead and actually have the affair? Or i guess you could always take that cheese grater to the knees for rugburn simulation.

Yes, NOTCOT loves NOT, and not just for the name (which stands for News On Trend). This first issue has been launched via pdf and its pretty fun - some good insightful articles in there worth checking out. Just discovered the Lonely Planet Guide to Experimental Travel in there, which will have to look into further for sure. And they highlight music goodness, Pandora as well as that new BMW campaign thats everywhere. Only thing i’m not so sure about is their tagline as “Il Primo Magazine Digitale Di Tendenze” haven’t there been others? I feel like i read so many trendspotting zine like things online and in my email? via KLOG. 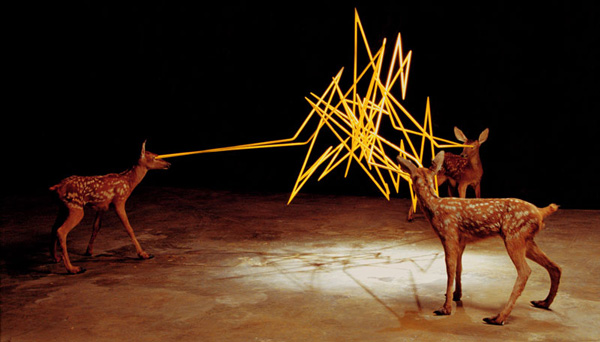 Frozen Upon Entry, 2002, 12’[L]x6’[H]x12’[W], brass, wood, foam, taxidermied deer acrylic paint, lead Bizzare, no? Just the kind of thing to kick off the weekend. Happy Friday! Anyhow, check this and the giraffe piece (see below) amused me the most from John Espinosa’s body of work, so thought it was worth a mention. via vvork.

oO posted these over to .org and they have been mesmerizing me all morning. Even drives me nuts when i can’t figure out what movie it is. Russian folk illustration stylized movie posters? I think we’ve got Spiderman, Star Wars, and LOTR here… and a few more that i liked details of after the jump. See more images here as well.

This week’s favs, as digitally selected by Shade Elaine - Space is one place that Matt hasn’t danced his jig, but if he were in space, he could eat space ram! (I bet it’s good for consumption on Earth too.) Elephants poop paper which, theoretically, artist Peter Callesen could use to make awesome art. If you feel icky about using paper made from elephant poop, go take a shower with an SAT math shower curtain.
(l-r, #548, #588, #626, #538, #618) - - - with voting started this week, and you can click on a poster’s name to see all posts by that person, NOTCOT.org is becoming more interactive… baby steps - come vote! and contribute!

The Industrial Design Excellence Awards of 2006 have been awarded - and the result is an extraordinary selection of 108 objects for you to spend a few hours studying and drooling over. While i wanted to post maybe 80 of these 108, i picked a few that were already my favorite objects this year, and a few others that grabbed me quickly for this post. But honestly you need to click HERE when you have the time to devote to it.

Here we have - Outdoor Information Carts by 34th Street Partnership. JobClock designed by Stuart Karten Design (i first encountered these tabs at Oxford, where they seem to be your key to everything). Little Wing Kayaks by Warren Light Craft. Kenzo Ryoko Perfume designed by Karim Rashid (i nearly bought these in copenhagen b/c it was so pretty). Voyage by fuse project and Hammers Nagel Engineering for Swarovski and Bombay Saphire. San Disk Ultra Plus SD/USB cards (three of these in my purse always, can’t remember life before it). Duo Shower Curtain Rod designed by Robyn Kaminski (great space saver, has the towel rack by the curtain). Nomadic Museum - possibly the most incredible/memorable “museum” experience of my life, seen here 5 min from my house.

There are times when images get stuck in my head - and this weekend a POST from UnBeige actually got stuck. I love this Fail Harder piece they found made from 150,000 boxes of push pins (kind of reminds you of the art in the tags, no? with pin head bush?) - but even better was the post.

“If you were looking for a box of those clear push pins on the West Coast around June 5, you now know why Staples was fresh out. 12, a dozen creatives who form an experimental school at Wieden+Kennedy, had purchased them all—150,000 of them.

When Helm was promoted to co-creative director of W+K’s Amsterdam office in 1996, Dan Wieden’s only directive was, “You’re only good to me after you’ve made three tremendous mistakes.”

Hence, their advice to every creative: Fail Harder.” 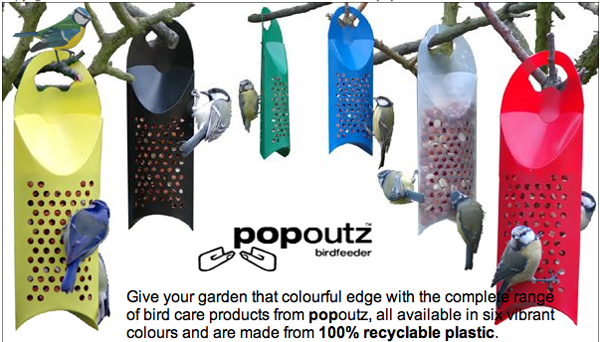 Popoutz are these great bird feeders with incredibly simple/reusable/flat pack design. Simply pop it open, fill it, hang it, and there you go! Nice vibrant colors, and a few other designs over at their site. Designed by Zelo Creative of the UK. Noticed this via .org this morning… also go check out the censor bar glasses, they are hilarious.