These are not new, but i felt somewhat ridiculous when i finally discovered who designed them. In AZ Central…

Fascinating, designer goods for all one’s needs… and beautifully shaped enough to look like a centerpiece, or sculpture to leave out. Thanks DesignBoomers for helping me realize who designed these. 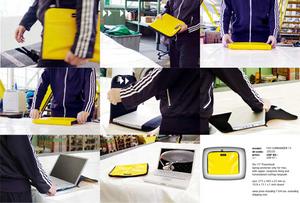 Finally! I love these guys, their wallet i first found at MOCA, the bags, their BOOK is a constant source of disbelief and inspiration… the soccer ball, the punching bag! (that i will someday have)… cute shirts even.

In case you’ve been living in a design free cave for the last few years, Freitag are the truck tarp, seat belts, and inner tube recyclers, who reinvent these items into colorful unique high quality designer goods, started by two swiss brothers. And they even have a somewhat DIY section where you can make the standard messenger bags by choosing which parts of specific tarps you want in their online flash store.

Here is their new iBook and Powerbook line, sadly only white and yellow solid colors so far, but if they go nuts and do random tarp sections, i’m all over it. Freitag

They are slightly twisted, somewhat amusing, and a great use of old imagery and clipart. A pity they’ve stopped making more daily, but the archive just amused me. And my apologies for not finding much the last few days, life got, well busy for a little bit there. So here, have a laugh, indulge your slightly darker side, then back to the real world. With_Gusto

Windmill in the sky? 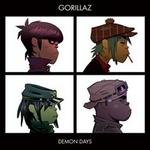 Everybody’s favorite cartoon band is back.  Well, they’re MY favorite cartoon band at least.  I’m talking about Gorillaz.  They have a new single & video out, called “Feel Good, Inc.”  The floating windmill in the video reminds me of Hiyao Miyazaki’s “Castle in the Sky.”  However, I don’t know why the hell he’s singing about a windmill.  And why is there gyrating cartoon ass in the video?  Anyway, Gorillaz’ new album, “Demon Days”, is to be released on May 23, and the single will be out on May 9.

Links to check out the video can be found on their fansite here:
http://fans.gorillaz.com/news.php 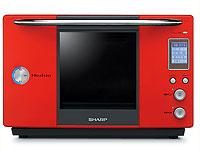 vs. microwave? Sorry for the delay in posts this weekend, kind of wandered away from home a little…

Here we have the Sharp Healsio Water-oven (thanks to popgadget). While the name and idea were interesting at first, you must read more on the Sharp site about the science behind it (some interesting diagrams after the jump).

Check it out, it doesn’t possibly give you cancer from microwaves, it REDUCES fat and salt, and cooks all at once. And last i heard steam facials are still good, so the technology seems mild enough? 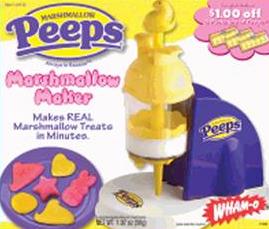 Happy Easter, go engadget for finding these peeps. Its Easter, you can’t help it, just have to have one, or poke at it at least…

Inside the box is the magical Peeps maker, 6 molds, a blue measuring cup for water, a yellow plastic stirrer and 2 sets of marshmallow mix and sugar. Marshmallow mix refills are available separately.ix Marshmallow Mix packet #1 with 1 Tbs. of very warm water. Stir for a maximum of 30 seconds. Add the contents of packet #2 and stir for a maximum of 20 additional seconds. Carefully fill the molds. Let your Peeps rest for five minutes, then remove them from the molds and roll in the yellow or pink dusting sugar. That’s it!

Amazing isn’t it? in that absolutely disgusting but intruiging sort of way? But that is the Peeps appeal i suppose? Anyhow, had to share this… check out the real Peeps site for more brightly colored amazement (such as the giant milk chocolate egg with a giant peep inside!) 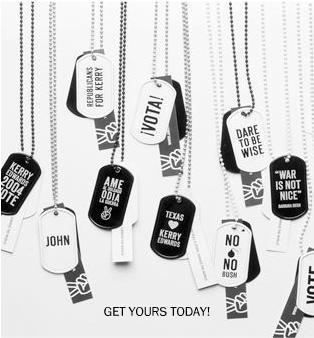 I know these are a bit late, but i just found them, and i’m kind of sad i missed out during election time. It’s a new idea, i could see these taking off like those sillicon bracelets? Maybe? And they have that great black and white appeal which you know i’m a fan of. Based in NY, founded by American Design Company, Homecrest, and an attorney’s joint inspiration this was the result.

They noticed that campaign buttons have virtually disappeared from New York City’s landscape, and decided to give them a new and fashionable twist. DEMTAGS, as they’ve come to be known, are a collection of black and white dog tags, two per chain, with pro-Kerry/Edwards images, slogans to get out the vote, and quotes ranging from notable Americans ranging from Albert Einstein to Barbara Bush.

So take a look at Demtags and get some ideas for the next big thing. 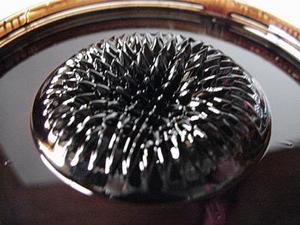 Ok I need this. This and an ingenious way to keep it safe in the form of a nice looking coffeetable piece people can play with… It’s ferrofluid… here’s the science side:

A lot more amazing pictures after the jump… only 25$ for a 50mL bottle from WonderMagnet (but do pay attention to the hazards, such as to clothing and skin exposure) If anyone else was at Siggraph in SD a few years ago, i think there was an example of something similar to this in the innovative technologies section on a much larger scale, it was the booth that was always crammed with people completely mesmerized.

It’s things like this that make me wish i had a puppy at times… And the name of this company is adorable WetNoz (wet-nose), just captures the essence of their fun filled products. I’m not sure how well this little pup booster and mat work, but i suppose it helps keep the mess easy to clean, and has a nice aesthetic, but just out of curiosity, aren’t the BIG pups the ones who need a higher dish? since the real puppies are closer to the ground? 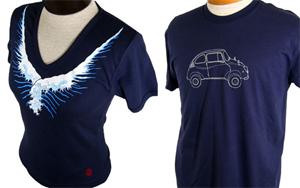 There’s an interesting blend of Japanese, Chinese, and Cali mixed into the 70six designs that gives them that uncommon edge in its designs. I personally love the twist on Hokusai’s Wave and how its created a visual V-wave across the girly-T. Also news to me was that the adorable car you see is the “soob 3sixty: subaru’s first car. at 360cc it’s no impreza but you gotta start somewhere.” (site quote)

Chudo Loo wrote us (after we inquired about the inspiration behind 70six) and informed us to keep our eye’s out for the 70six site update coming this weekend! Chudo is a web designer/developer full timer with a passion for heritage as seen through design. (And anyone with the guts to quit being a software developer and fulfill the dream of starting a tshirt line is worth helping out in my books!) 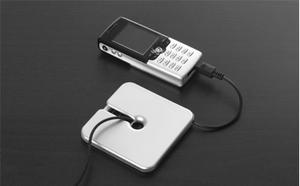 Cableyoyo is a small, ultra-thin product with a big mission: to reduce cable clutter and bring order to your desktops or floors. Designed and produced by Bluelounge, Cableyoyo’s minimalist casing relieves the eyesore of unmanaged cords, and protects them from damage due to twisting and tangling.

I love how these are mountable through a knob that fits into the center of the square. And their images of the product are so enticing (take a look at more post jump). A clean simple solution for packing/travelling as well as mounting the cables at home for a discreet docking station. Black, Silver, and White and a mere 3”sq, they are as tiny as their 5$ price. 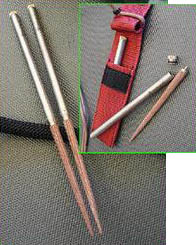 For the boy with everything (ok specifically the guy who only has chopsticks in his kitchen) Travel compacting chopsticks… they remind me a lot of mini billiard cues, especially the way they unscrew in the middle, and have a nylon carrying case. The handle is a hollow stainless steel tube that becomes the storage unit for the chopstick. It has brass caps with O-ring seal, and natural birch tips. Made by Snowpeak. [$19.99]

Update: Cheaper pair found at Back Country Gear for $16.00

Everything Will Be Ok

I’m sure you’ve picked up on today’s trend… a little pick me up for an overworked stressed friend. And there’s something heartwarmingly comforting about this graphic, and also as the red girly hoody print, and men’s and women’s shirts. Also take a look at some of the other retro cali feeling shirts by No Star. 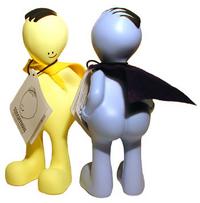 You look at him, he smiles, You touch him, squeeze him, crush him in your hands, and he bounces back. He has a blankie/cape that is made from felt, in matching colors, black or white for the white Tooshyman. He comes with his blankie (and instruction booklet) in a tubular transparent drawstring bag that protects him from drafts and sunburn.

Designed by Aviva, a Philly born painter/photographer who fell in love with Paris, and lives in Toulouse. [great illustration after]