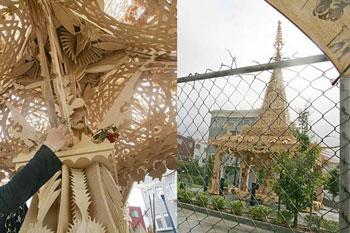 The 40-foot structure is made of leftover plywood cutouts from a Bay Area toy factory. It serves as an altar, where people can mourn, remember, write messages, burn incense and leave flowers. It will be up until mid-September and then removed, the first in what Best and the city hope will ignite a renaissance for temporary public art, which allows artists to experiment and be more risky.

As promised, here are some of my favorite shirts from the Remo General Store. I love the design of this site, and it’s ability to be useable and somehow capture such a warm cozy “back in the day” style of a General Store. I love it. You must also take a look at their banners… pretty nice.

Google ads take you to some great things… like the Remo General Store in Sydney… they have some amazing tshirts online, and great stories to go with everything. (See next post about the shirts)… but surprisingly the most intruiging thing about this company is it’s background, the owner went on to be a Frog Design Brand manager in the end of the 90’s as well as many other amazing things… the walk throughs of the company and its branding as well as its usability imagery for the site are not to be missed.

Oops… moveable type error? Or possibly human error… but just to let all the nice readers who posted comments the last week know that it wasn’t notifying me about receiving comments! So thats all been fixed now, and they are all up. Nice feedback from DNA11, Jenna found a place selling Capellini paper, a few people chatting about the Blackhole in LA… so go check it out. Drop them a line? Drop me a line?

Aha! So another elmo infiltration of adobe…

Cris Rys’ “Adobe Merging” T-Shirt commemorating Adobe’s pending merger with Macromedia. UPDATE: I’ve received a correction, Lynn Shade emailed me to say “the “Merging” t-shirts were made 3 years ago when our Pro UI Team “took over” the Consumer UI team — the Consumer UI guys made that shirt. Which was pretty funny.” Thanks for the correction Lynn. Ironic that I assumed it was related to Macromedia and it wasn’t!

Great article on life at Adobe found by hi-res.

you yes you dot net 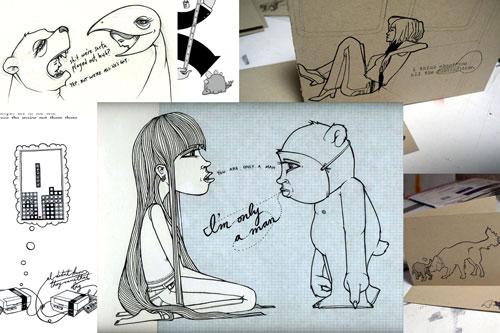 The work of Jason Sho Green… it kept me up tonight. sucked me into a world of sadness and beauty and a theme throughout that hits you somewhere bizarre, but i couldn’t stop looking and going through every page and image i could find. I couldn’t decide which pic to show you, so here’s a quick collage.Art that resonates that pouty empty feeling… good? bad? always someone to relate to it?

Music inspires some of the most incredible art… gig posters are some of the easily overlooked pieces of inspiration, not as well documented as masterpieces, but they ought to be. Gigposters is a priceless resource of inspiration.

BUSY BEAVER BUTTON Co.! This image on their main page makes me want to print buttons… NOTCOT buttons anyone? … p.s. the Button-o-matic is worth looking at, wish there was one here. 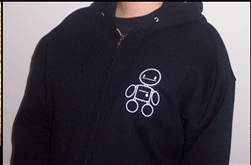 Ok Questionable Content junkies, pintsize is too cute on that hoodie. Nice one, for those in the know, playfully eyecandy-like enough to get you reading the comic if not… and stands alone nicely, no context needed…

But also, today’s QC - in the words of Jermacide… Pintsize spoke “British”! Read it aloud in your head, its more fun that way. Hehehe. 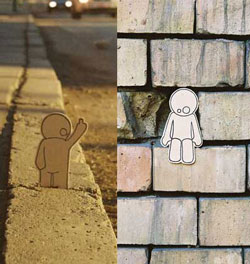 Mija’s work found on the streets of Klaipeda, Lithuania make me happy, and want to run out to buy foam board. Infact, maybe i’ll do just that now. It’s those little things in life that make it fun, and why not add a few of your own to the world… via wooster, my constant source of eyecandy. 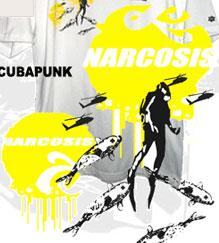 Get Narc’d? I never thought i’d want a shirt that addressed narcosis, or even really considered a punked out tshirt line focusing on diving, but now that i’ve seen it, i can’t get it out of my head. Tropical dive, gorgeous wonders all around, then suddenly feeling a little light headed… and WHAM… coy everywhere? Just feels like a trippy dream… manifested into a simple T-shirt. Cool Hunting found this Singapore group, and it looks like they’ve gotten a lot of press in the asian and diving mags, i admire the group, and feel somewhat inspired to start meshing my passions in new ways. SCUBPUNK! 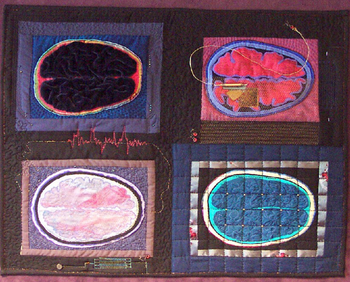 Art comes from all types of inspiration, in this case it’s replicating brain imaging. This is an interesting interpretation of making art from scientific visualizations. A different take from the DNA visualizations below, this one implements a nice blend of the tradition of quilting and modern brain scanning imagery. [via mindhacks] 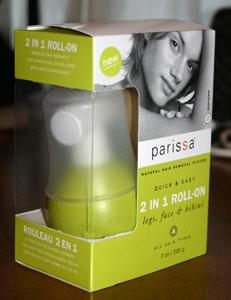 Refreshing packaging design for home waxing… Parissa seems to have gone with a full on packaging design makeover… another image after the jump. Unique take on a microwavable bottle, roller applicator, with a colorful line of products.

Found it while wandering Whole Foods…

More shirts printed~! Getting the hang of the process more… starting to be fun even. For everyone that placed orders, a batch shipped out today, so they should be in your hands soon. Also got playful, and test printed on a limited edition Harry Potter and the Half-blood Prince bag… drop me a line if you’re interested in more shirts (or the bag!)

Designer hearing aids? It’s about time. The boundaries of design need to be pushed everywhere… This is from a new exhibit called Hearwear opening at the Victoria & Albert Museum in London this week. The show is a collaboration between the Royal National Institute for Deaf People (RNID), design magazine, Blueprint, and creative agency Wolff Olins. I find the “Goldfish” particularly fascinating for its ability to instant-replay the last 10 seconds of sound… maybe elminating many of the “what?”s that come up in conversation? unless of course this means to hear the last ten seconds you just missed ten more… ah the recursive problem that might evolve.