“In a time where identity is cause for prejudice, and individuality is sacrificed to the mind-numbing power of the Gods of Generic, new champions will emerge, bearing with them hope for an increasingly faceless world.” Can’t you hear that as a voice over to the latest network tv show? I think these guys can take on Heroes. Newest line from Podstar (see NOTCOT Review) are these Diablo Spectrum skins ~ add some colors to your ipods! With names like Matadork for the red with lime green wheel, you can help but smile as you roll over them.

I love all the ingenious things people manage to do with shipping containers… to add to the list? This great installation piece by Hulger (the brilliant retro phone handsets for mobiles and bluetooth) over at Tokyo’s 100% Design this year, where you can experience what it feels like to be able to see and talk just like prisoners, but not touch.

Free People has a Blog! I must admit i’m impressed with the cutting edge webbiness of Free People - they were the first fun shopping site i noticed had RSS feeds for their new products, and they are fully embodying the selling a lifestyle/culture brand with their blog… surrounded by their classic stylishly vintage/collage-y design that i love, and filled with fun, witty commentary and designer eyecandy (as well as behind the scenes tidbits from the catalog shoots and whats going on in their philly office, customers get a feel for WHO the people behind the clothes are… after all isn’t that what corporate blogging is all about) So what’s next? The Urban Outfitters blog?

I know i promised that i would be back on top of things Monday evening - but i just drove back to LA from SF - have been desperately trying to compose a decent post, but this migraine will NOT let up! But i did manage to post a few quick must click/reads over to .org, so i hope that will keep you going till tomorrow. Some reviews i want to post this week that i’m really excited about… also maybe i ought to think about finding some writing help here, running out of enough hours in the day! Any thoughts?

WOW. I almost missed that Thursday happened altogether. It’s been that kind of a week. With the new launch last week of .org’s new system, we’ve had a great response, a LOT of submissions, and the most notcotty (can that be a word?) ones are all up for your viewing pleasure. All creative eye candy all the time! Welcome to all the new registered users, its so nice to get to see the bios and webpages of users and get a feel for who you readers are, and what you might like. Keep up the great contributions, i honestly look forward to all of them when i wake up. 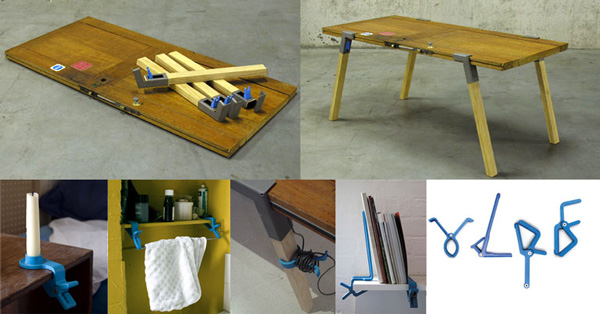 Clampology: is it a religion? a science? a way of life? Or really just some brilliantly functional plastic with some spring action clamping? Maybe all of the above. The Jorre van Ast site describes it as “Clamp-a-book, clamp-a-hook, clamp-a cable… Design solutions derived from the clamp typology: a family of objects, each with a specific function. The collection of these informal utensils includes a book stop accompanied by a book finger, a book display, a hook and a rail that clamp onto the side of horizontal surfaces, a hook to clamp on to electrical pipes, a candle holder, and a cable manager that can be clamped onto a table leg.” Brilliant. Thanks, RUGenius.

Artefacture’s line of design oriented tees speak for themselves. Love them. “I will pay for good design” “Design will save the world” “Design Elevates Experience” … there is also a “Hard Disc Jockey” 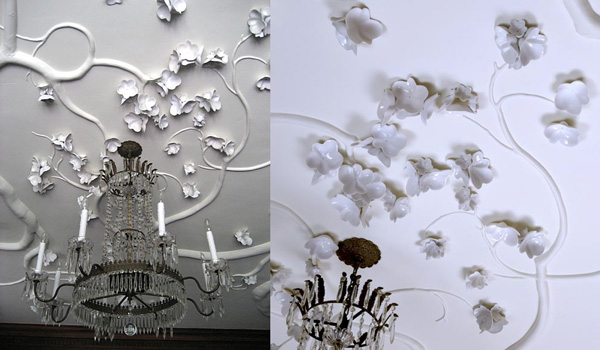 Been staring at LisaJay’s post over at .org all morning, and i can’t get over David Wiseman’s ceiling. His ability to have things emerge out of walls oh so subtly makes my head spin. Something about this ceiling (and listening to the Marie Antoinette soundtrack right now) ~ i could picture it being in the film. Versailles needs this! Or my studio… someday.

I’ve been testing out the Vaja Treo Case for a few weeks now (of all the iPod cases, the red vaja case has remained on my ipod still) ~ and i must admit, as a treo user, i already found the phone a bit big, so the idea of adding a case to it that would make it even the least bit thicker i was slightly appalled at. But low and behold Vaja has changed my mind on that, after all, its not like i’m the kind of girl who could ever fit a treo into the pocket of tight jeans, and if i’m already carrying a big purse, what’s a little more padding on the phone? (and no, i don’t do that tech tools around my waist thing.)

Seriously it feels amazing. There is something about the way holding my now black molded Argentinean leather that feels great in your hand, against your face, and less slippy when you go “no hands” and can’t find your handsfree. And it really was the ultimate makeover for my very scratched up treo, looks better than new. And all the important parts are still accessible, but it literally fits like a glove, a gorgeous leather glove. See all the Treo Case colors and options.

Additionally, you have to check out the gorgeous packaging Vaja products come in (see the pictures after the jump)… also their pouches come in such vibrant, lush colors (pick a pantone, almost any pantone) for those who’s phones or gadgets want a more discreet case.

Came across this piece by Michael Schall, while at that art festival in DUMBO, and was completely mesmerized by it. Can you believe it is graphite on paper? In this piece, from afar it looks like mountains… and as you get closer, much much closer, you notice all the tiny water towers. Close ups below. 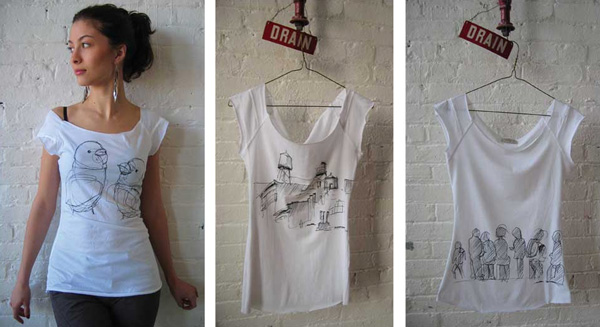 Toby D (named after grandmother - great story of how this company came to be after the jump) is a line of limited edition tees with original silk screened artwork by emerging illustrators, graffiti artists, designers, and painters. This collection of Doodle Tees are by Ardith Ibanez. These birds, buildings, and people doodles have such a charming quality to them, and the cut of the shirts looks so flattering. 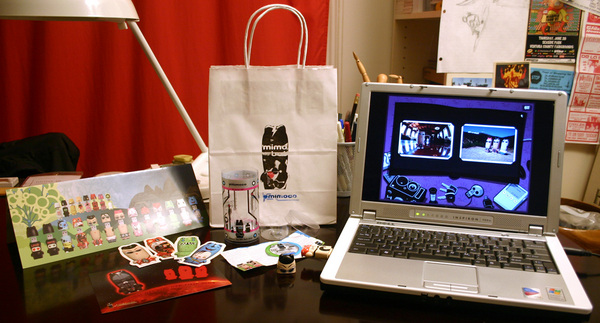 I need more Mimobots. I’m pretty sure of that now. Because while i love my USB keys and toys as much as the next guy… (ok fine maybe a little more)… exploring the data inside Ramona has hooked the artsy McCarty fan in me. What the other sites never conveyed to me well enough was that each Mimobot is a mini multifaceted piece of art … gorgeous toy on the outside, usb key on the inside, and dig deeper and, in the Ginchy Series, you have a flash site to explore with a photo album of so many breathtaking photographs by McCarty of the trio around old school LA landmarks… with a great soundtrack by Phofo (their theme song and one song for each of the characters) to listen to on that vector ipod while you flip through… as well as 4 previews to make you crave the other Mimoco Mimobots as well. So see below for more images of what you’ll get when you adopt your Mimobot.

The majority of USB keys are oh so boring… So why bother with those, when you can show some character ~ AND hold your data? I’ve been seeing Mimobots around the internet for a while now and loved them, but fell for them far more when i checked the whole line out in person while at Digital Life! (where you may have heard about their Darth Vader Mimobot announcement!) Evan and Nicole were even nice enough to give me Ramona #100 out of 500 to play with, and she was a life saver during the show when i needed to mess with file transfers.

Ramona is one of three in the Ginchy Series, designed by Lili Chin (co-creator and producer of the hit Mexican Wrestling cartoon series “¡Mucha Lucha!”). But what really sucked me in was the accompanying photography for this series by Brian McCarty (see the old NOTCOT post about McCarty) - “renowned toy photographer and director/producer provides an extra-special cargo load for the series with his quirky photo albums of the Ginchy friends’ Los Angeles adventures, set to a soundtrack by Phofo.” See some of the great images of the rest of the Ginchy line in their rockabilly LA portraits below, as well as the invite to the Launch Party for the line over at Munky King this weekend! 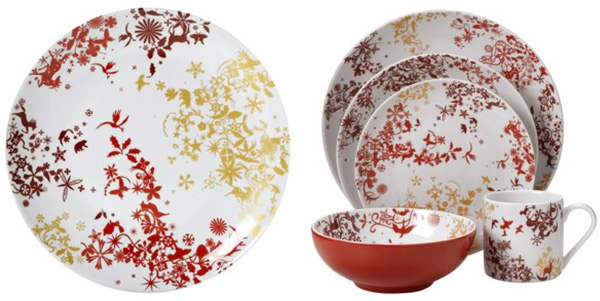 I have a softspot for the work of Tord Boontje. (see all these posts?) And so you can only imagine how i’m feeling tonight discovering his line for Target. It’s gorgeous, insanely affordable, and only available online ~ i have pics of most of the products below. My favorite is the line you see above though… the Multicolor Dinnerware Collection… especially the bowls and the dessert plates. There is also another holiday collection of Dinnerware, a holiday party pack (paper plates, cups, napkins, etc), candelabra, and candle holders.

P.S. here’s the link to the Target Red Hot Store for it. 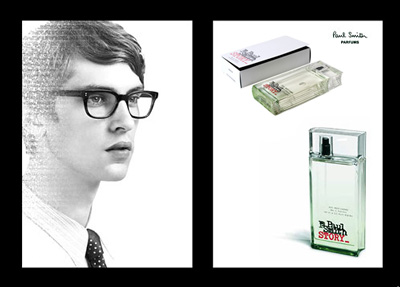 Who is Paul Smith? Other than the man with the stripes? Well when i heard The Paul Smith Story, i was first taken by the interesting bottle ~ book shaped in both box and glass form… and the website is actually quite interesting (although super flashy)… And the adverts show the character of the Paul Smith Story writer… who is apparently “has the look of someone who’s profession - infact, his passion is writing. He is studious. Slightly geeky, even. A classic portrait emerging from a haze of type.”